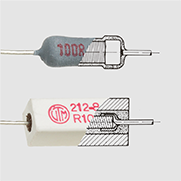 A wirewound resistor is an electrical passive component that limits current flow on an electrical circuit.
As the name indicates, wirewound resistors consist of a resistive wire, with different alloys, wounded around an insulating substrate, to achieve the desired ohmic value, and can be finished with a protective coating, ceramic case or moulding.
For a wirewound to be used on the end application, the resistive wire has to be connected to the terminal leads.

The first and therefore the oldest resistor technology initially used only for precision and power applications, is nowadays used in several applications. The application requirements determines the selection of winding, contacting method and partly also the type of finishing. Wirewound resistors are distributed into some major categories according to their mains characteristics and application.

For more information about available wirewound resistor, check our “How to choose the right resistor” infographic.