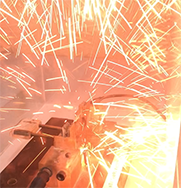 When electricity is conducted through a resistor, heat is generated and dissipated through the surrounding air. Under excessive voltage, a resistor generates so much heat that it cannot dissipate the heat quickly enough to prevent burning.

When designing any type of circuit, all possible causes of circuit instability or failure need to be taken into consideration, as do the consequences of these effects. Such considerations are particularly important when the long-term reliability, stability, and precision of the circuit are vital to the application.

Overloaded Resistor
When a resistor has been overloaded with voltage exceeding its power rating, the resistor will become very hot to touch and darken considerably. This can have several consequences. The resistance value can shift permanently, the lifetime can be significantly reduced, or the resistor is completely damaged resulting in an open circuit. In extreme cases the excessive power can even melt or catch on fire.

One cause of failure in many applications is temporary exposure to unexpectedly high current peak, or short but severe overload (STOL). That’s why it is crucial to choose the right resistor for your application.