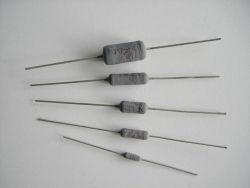 The VITROHM series CRF is designed for circuits with clearly defined failure-mode-conditions, especially in power-supplies and chargers for mobile equipment use.

The wirewound resistors series CRF will fuse abruptly, without flames or explosion, when mains-voltage (230 / 240 Vrms) is applied.
These components contain a special coating covering the resistance winding. This assumes the case of the evaporation of the wire in the metal vapor and prevents arcing, and thus a short circuit.

The winding wires for resistance values from 10R to 330R (higher values on request) are specially dimensioned so that the evaporation occurs at mains voltage. The resistor elements are coated with a special laquer and on top with silicone varnish.
For an application with mains voltage 110Veff the value range is limited.
For resistance values below 10R and for other voltages it is ensured that the resistor can’t burn, but the fusing function must be tested in each case.

The CRF series is available in six sizes (0309-0918) with power rating from 1W to 5W, standard tolerance is + / - 5%.
A version approved according to UL1412 is also available in all sizes with the typename CRF25x-8, see separate data sheet.
Beside the safety function, these resistors also act as inrush current limiting and withstand norm pulses up to 6.5 KV.